Our clients’ 1964 home, originally designed by famed architect Jack Simison, was due for a major update of its first floor which included everything from the entry through the living spaces and kitchen. The intriguing radial design of this La Cañada home is spectacularly sited overlooking mountain and city light views. 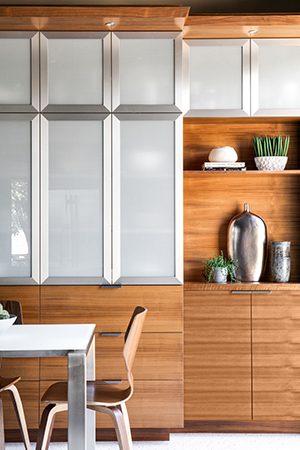 Kitchen – Before and After.

A major aspect of this remodel included an extensive redesign of the kitchen. The Island Stone backsplash is fashioned with subtle angles and anchors the surrounding walnut cabinetry by its attractive sea glass color. The sleek design of the new Wolf Gas Cooktop and Vent Hood adds to the contemporary style of the space. A spacious island provides a generous prep and eating space that also doubles as an area for casual entertaining. Elegant cabinetry at the far end of the kitchen allows for plenty of storage as well as a nice focal point.

Family Room – Before and After.

To allow natural light into the rest of the home a wall was removed between the family room and new kitchen. A custom entertainment cabinet system was designed to provide more storage and complement the adjacent space. Subtly cool neutral paint color, like Dunn Edwards Shady was used on the walls to keep the room bright without it feeling stark while balancing seamlessly with the Bison Beige used on the tongue and groove ceiling. 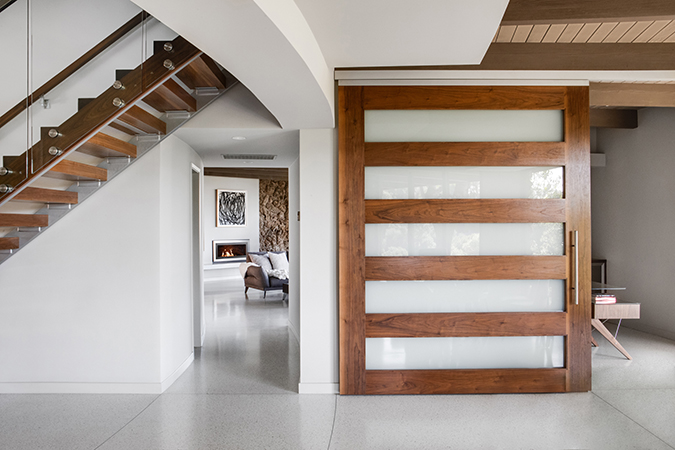 Living Room – Before and After.

This home features many unique characteristics, one being the original lava rock wall found in the living room. To update the space, a concrete plaster surround was added to create a modern accent in the room. The floating hearth was also refinished to match the original terrazzo flooring found throughout the rest of the home. A large, five glass panel barn door in walnut now adds privacy to the office from the rest of the living areas, but serves as an eye-catching focal point of the home.

Entry – Before and After.

The new entry and modern staircase with glass panel guardrails adds another contemporary element to the home. Blackjack’s SWIRL light pendants and soffit lighting add drama, as the Terrazzo floors preserve its vintage yet vogue aesthetic.